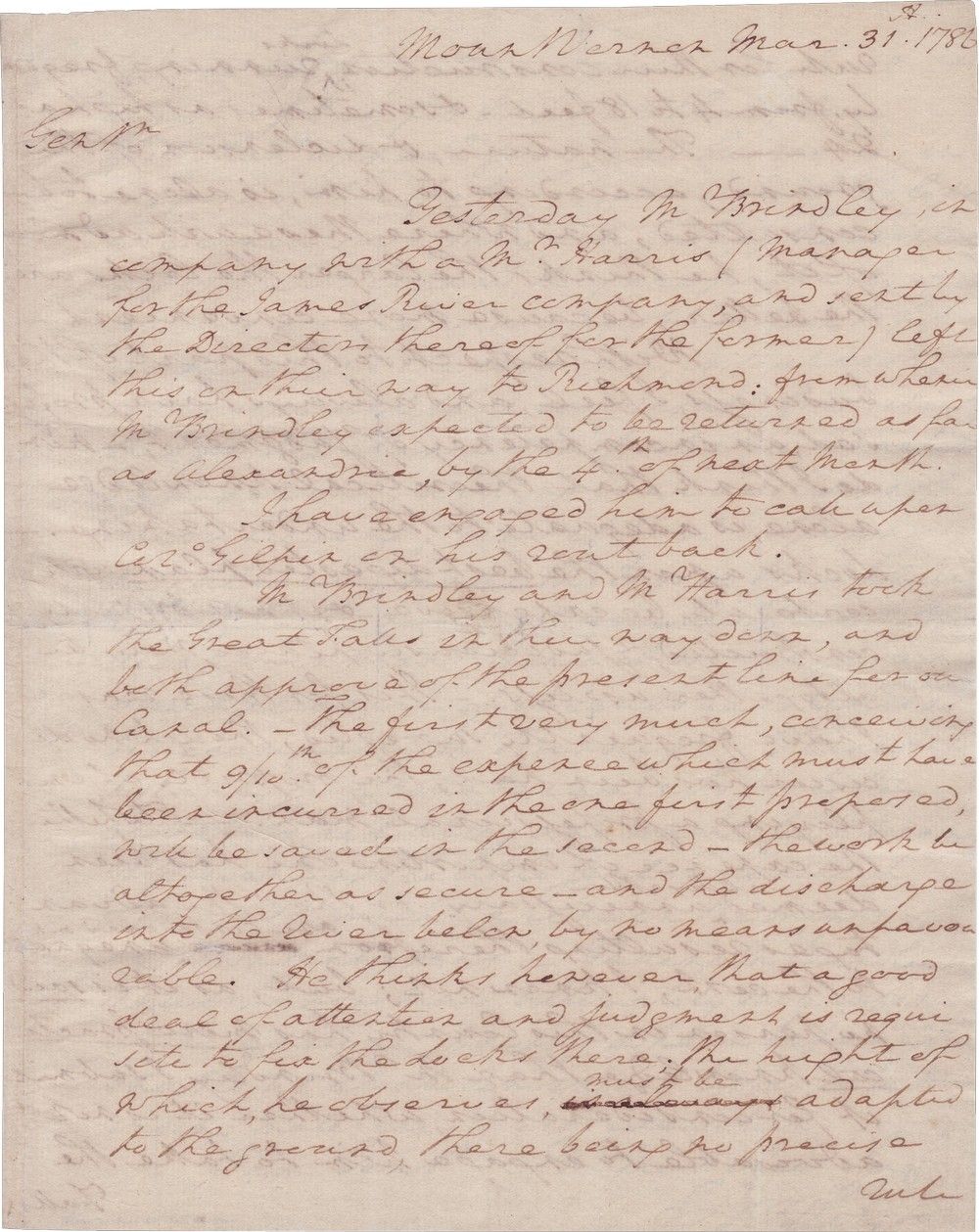 This was, for Washington, only the first problem: acceptance of the shares, Washington believed, would compromise the reputation for disinterested public service he had carefully cultivated and protected from the start of the Revolution. Still, he was concerned about how to refuse them without seeming rude, haughty, or unappreciative: a dilemma he finally solved by holding the shares in trust for public benefit, and leaving them in his will to the national government. But despite his refusal to use the stock for his own benefit, Washington was passionate about the prospects for opening the Potomac above the falls. Envisioning a commercial waterway which would link the new West with the old East, he saw in this the magic and crucial necessity of national unity. There was nothing, he felt, which would bind one (nascent) state to another, but commercial interest. So he dove in, head-first, into that daunting project, as this letter attests: discussing locks, declensions and the fine points of canal building with aplomb, he nonetheless recognizes he is out of his depth:

With respect to this part of the business, I feel and always have professed, an incompetency of judgment - nor do I think that theoretical knowledge alone, is adequate to the undertaking. Locks upon the best digested plan  will certainly be expensive - & if not properly constructed, & judiciously placed, may be altogether useless. It is for this reason I have frequently suggested, though no decision has been had, the propriety of employing a professional man.

James Brindley, the nephew of the great canal engineer of the same name, did meet with Fitzgerald and Gilpin – but there is no record of his having been hired.
Autograph Letter Signed (twice: as “G. Washington” and with initials), 4 pages, recto and verso, quarto, Mount Vernon, March 31. 1786. To Colonels John Fitzgerald and George Gilpin.
Read More

Yesterday M Brindley, in company with a Mr. Harris (manager for the James River company, and sent by the Director thereof for the former) left this on their way to Richmond: from whence M Brindley expected to be returned as far as Alexandria, by the 4th of next Month.

I have engaged him to call upon Colo. Gilpin on his rout[e] back.

M Brindley and M Harris took the Great Lake in their way down, and both approve of the present line for our Canal. -The first very much, concerning that 9/10th of the expence [sic] which must have been incurred in the one first proposed, will be saved in the second - the work be altogether as secure - and the discharge into the river below, by no means unfavourable [sic]. He thinks however, that a good deal of attention and judgment is requisite to fix the Locks there; the height of which, he observes, [text is crossed out] must be adapted to the ground, there being no precise rule

rule [sic] for their construction; Locks running, frequently, from 4 to 18 feet - & sometimes as high as 24 - The nature, & declension of the ground, according to him, is alone to be consulted, and where these will admit of it, he thinks, the larger the locks are, the better, because more convenient.--

With respect to this part of the business, I feel, and always have professed, an incompetency of judgment; - nor do I think that theoretical knowledge alone, is adequate to the undertaking. Locks upon the best digested plan will certainly be expensive - & if not properly constructed, & judiciously placed, may be altogether useless. -- It is for these reasons I have frequently suggested, though no decision has been had, the propriety of employing a professional man. --Whether the expence [sic] of importing one has been deemed altogether unnecessary; or, that the advantages resulting therefrom [text is crossed out] are considered as unequal to the cost, I know not; but, as it is said no person in this Country has more practical knowledge than M Brindley, I submit it for consideration, whether it is not advisable to engage him to take the Falls 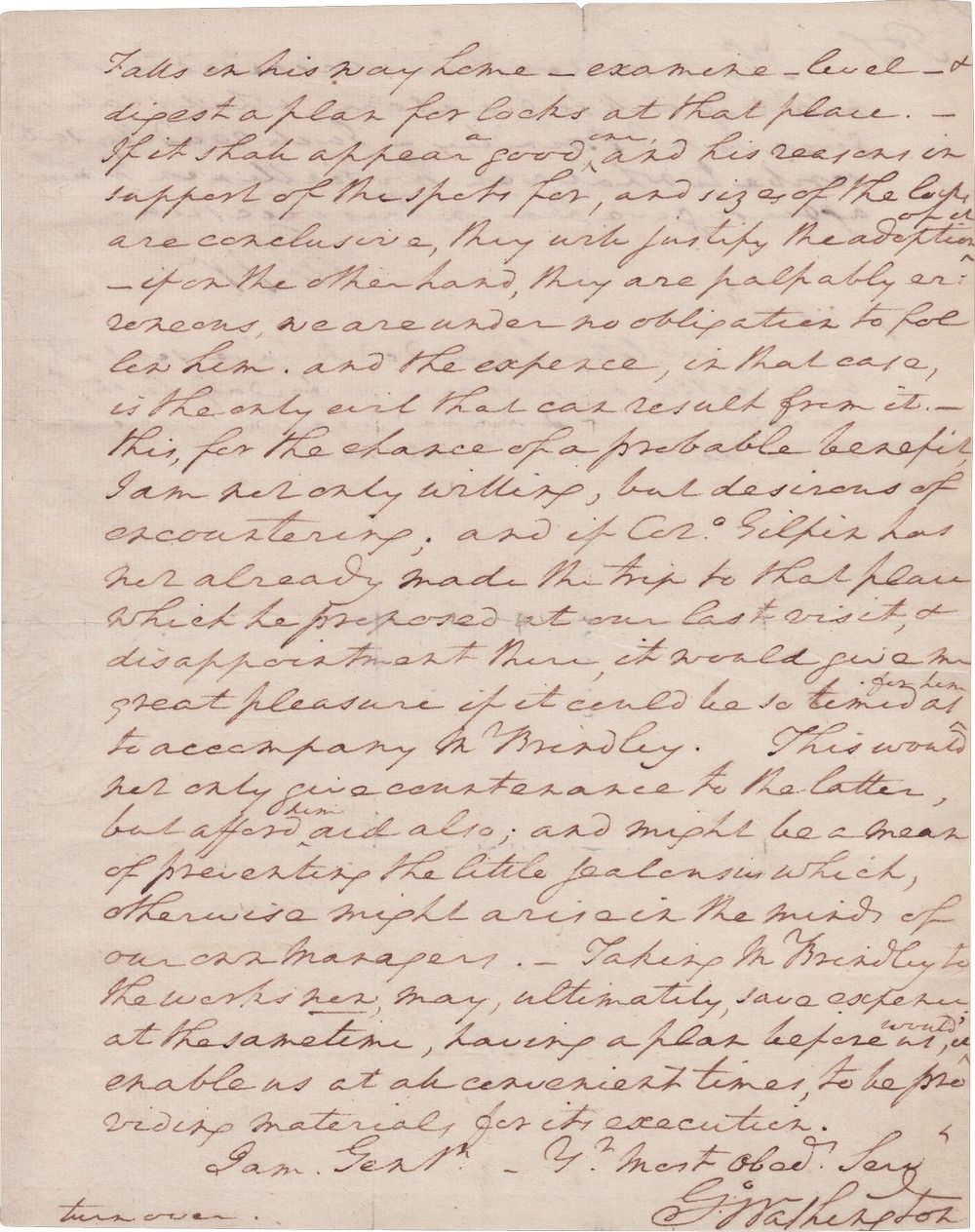 Falls [sic] on his way home -  examine - level - & digest a plan for locks at that place. If it shall appear a good one, and his reasons in support of the spots for, and sizes of the locks are conclusive, they will justify the adoption of it -  if on the other hand, they are palpably erroneous, we are under no obligation to follow him and the expence [sic], in that case, is the only evil that can result from it. - this, for the chance of a probable benefit, I am not only willing, but desirous of encountering; and if Col.o Gilpin has not already made the trip to that place which he proposed at our last visit, &  disappointment there, it would give me great pleasure if it could be so timed for him as  to accompany M Brindley. This would not only give countenance to the latter, but afford him aid also; and might be a mean of preventing the little jealousies which, otherwise might arise in the minds of our own Managers. Taking M Brindley to the works now, may, ultimately, save expence [sic] at the same time, having a plan before us, it would enable us at all convenient times, to be providing materials for its execution. 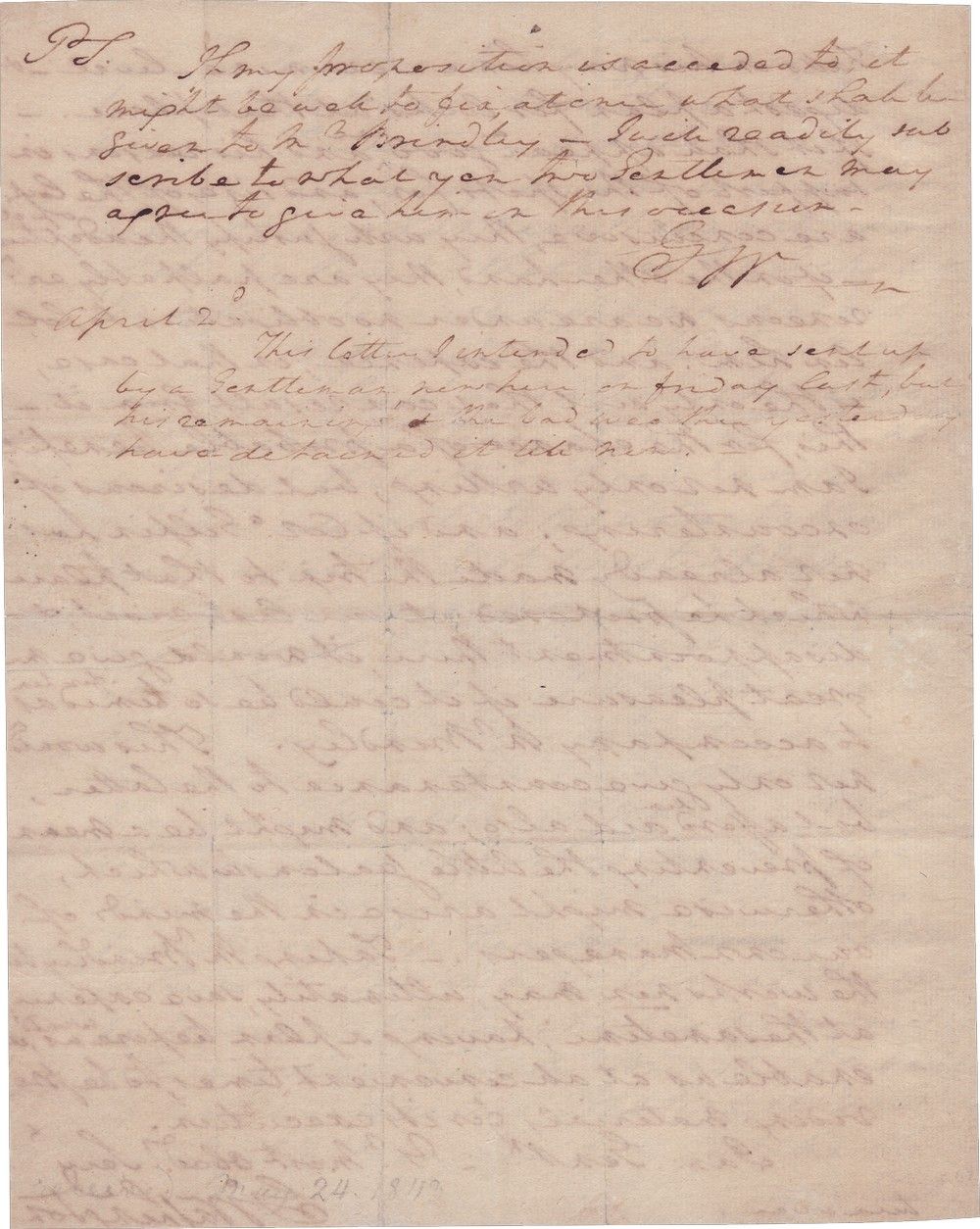 If my proposition is acceded to it might be well to fix, at once, what shall be given to M Brindley. I will readily subscribe to what you two Gentlemen may agree to give him on this occasion --

This letter I intended to have sent up by a Gentleman, now here, on friday [sic] last, but his remaining & the bad weather yesterday have detained it till now. 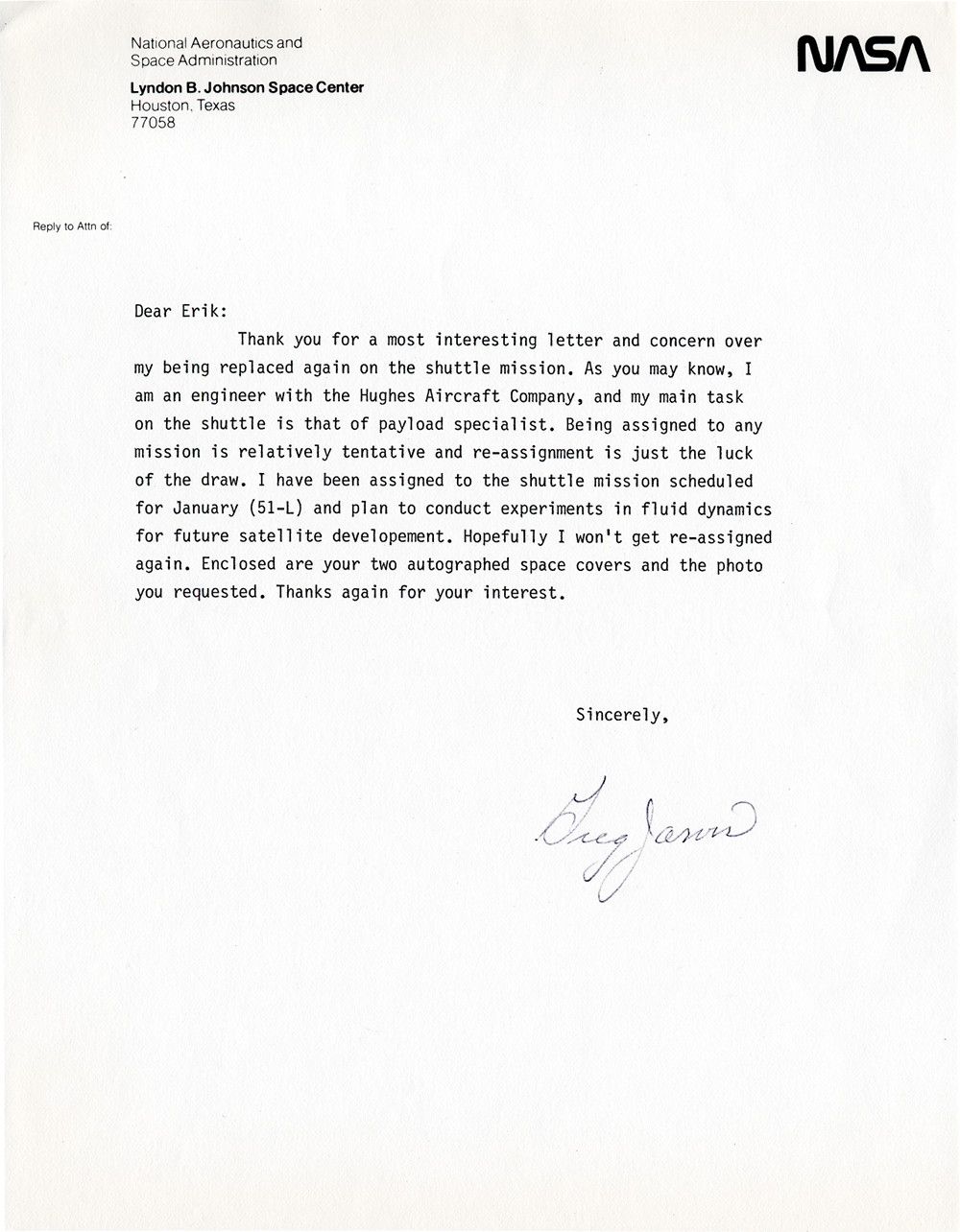 Gregory Jarvis Says That Space Mission Assignment is "Luck," and He Has Been Assigned to the Challenger 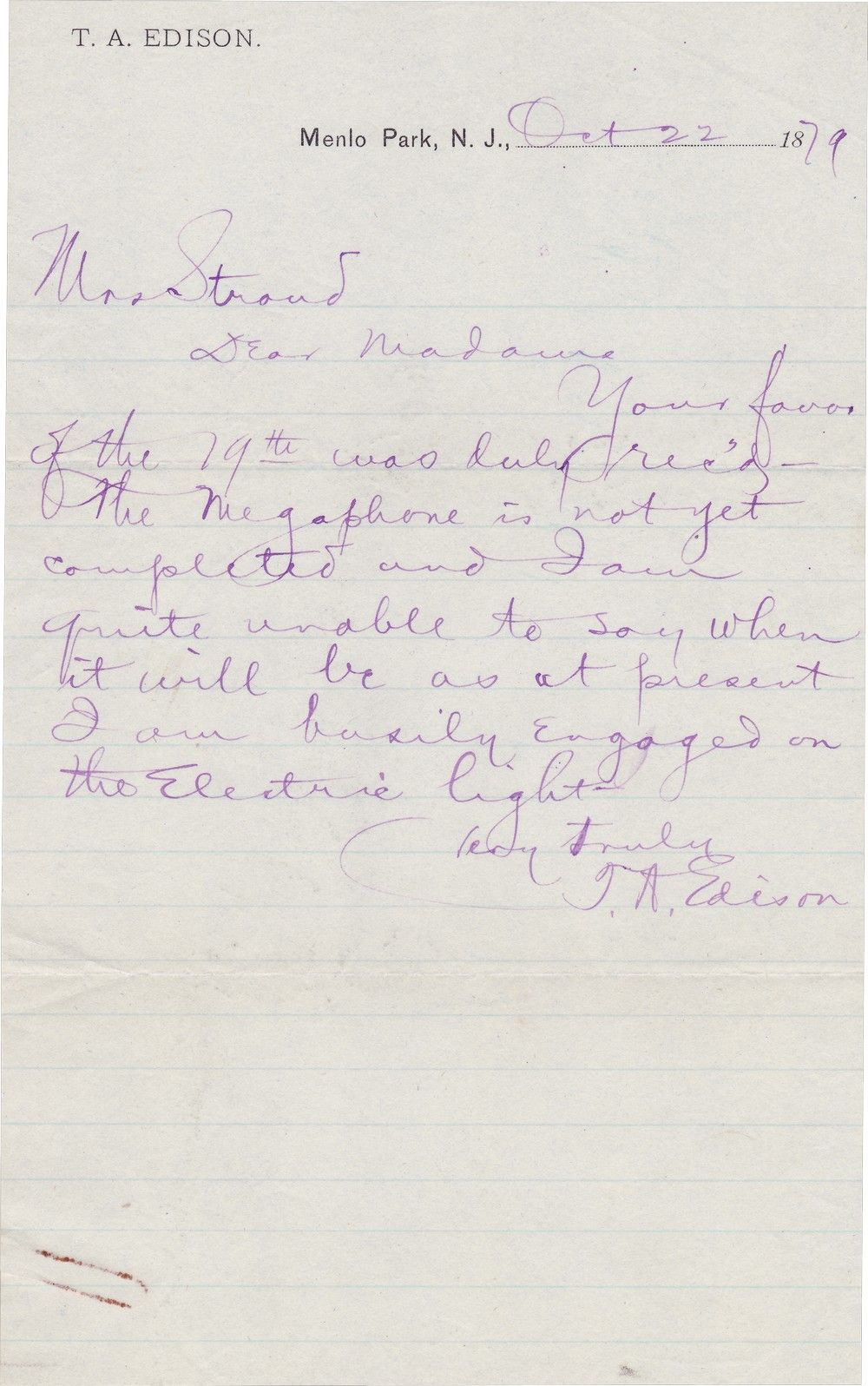 Thomas Edison: "I Am Busily Engaged On the Electric Light"