Alfred Mordecai, Jr., the Jewish graduate of West Point and Ordnance expert, was very much like his father, Alfred Mordecai Sr., the Jewish West Point graduate and Ordnance expert, but for one thing. When it came time to choose sides in the Civil War, the son chose the Union and the father, unable to betray either his Oath as an U.S. Army Officer or his family ties to North Carolina, resigned his commission and retired, unhappily, to private life - disappointed, as well, that his son did not do the same.

With this document President Lincoln appointed the younger Mordecai a Second Lieutenant in the Corps of Topographical Engineers. With the outbreak of Civil War, however, he first served as an aide to General Howard and then transferred to the Ordnance Department. He rose to be, by war's end, a much decorated Lieutenant-Colonel; and afterward taught- as had his father before the War - at West Point. He died a General.Document Signed ("Abraham Lincoln") as President, partially-printed and accomplished in manuscript, 1 page, folio, Washington, D.C., August 10, 1861; being the appointment of Alfred Mordecai, Jr. a Second Lieutenant in the Corps of Topographical Engineers. Co-signed by Secretary of War Simon Cameron. Replete with wafer seal.
Read More

THE PRESIDENT of the United States of AMERICA,

To all who shall see these presents greeting:

Know Ye, That reposing special trust and confidence in the patriotism, valor, fidelity, and abilities of Alfred Mordecai I have nominated, and by and with the advice and consent of the Senate, do appoint him Second Lieutenant in the Corps of Topographical Engineers in the service of the United States: to rank as such from the Third day of August eighteen hundred and Sixty One [.] He is therefore carefully and diligently to discharge the duty of Second Lieutenant by doing and performing all manner of things thereunto belonging.

And I do strictly charge, and require all Officers and Soldiers under his command, to be obedient to his orders as Second Lieutenant [.] And he is to observe and follow such orders, and directions, from time to time, as he shall receive from me, or the future President of the United States of America, or the General or other superior Officers set over him, according to the rules and discipline of War. This Commission to continue in force during the pleasure of the President of the United States for the time being [.]

GIVEN under my hand, at the City of Washington, this Tenth day of August in the year of our Lord, one thousand eight hundred and Sixty One and in the Eighty Sixth year of the Independence of the United States.

By the President.
Abraham Lincoln [in Lincoln's hand] 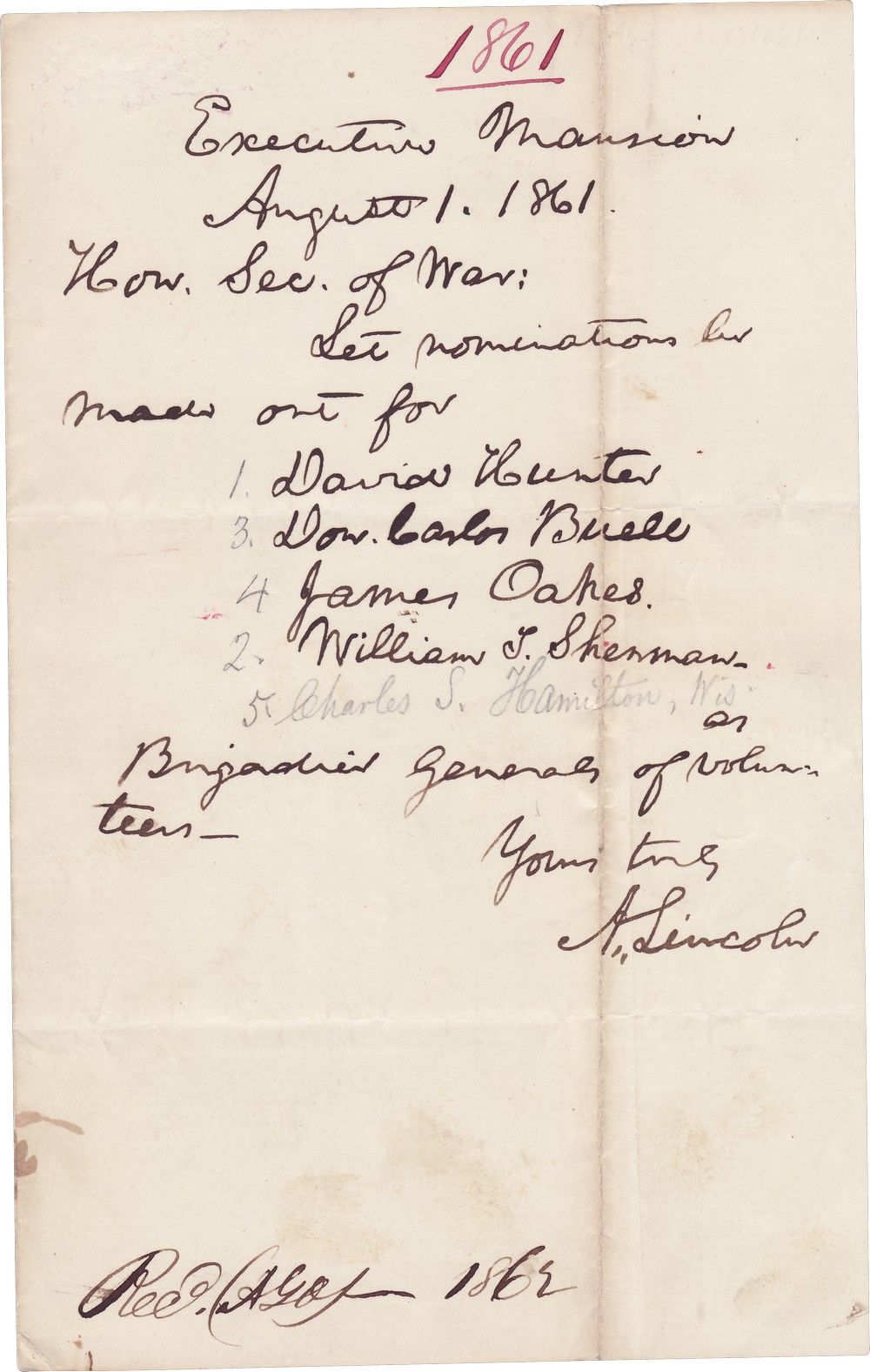