Beset By an Ally-Turned-Detractor, Theodor Herzl Says It's a "Miracle" He Hasn't Become an Antisemite

Running a newspaper, founding a state, and not having enough money to do either, Herzl writes here of constant problems: paying for stories, dealing with scoundrels, and absorbing endless criticism...

Herzl has for Wolff a “question difficile”:  how much does she expect to be paid for her story? His Zionist paper, The World, unfortunately has to make calculations. “I certainly do not want to disappoint you, nor can I impose too heavy a burden on the journal,” he explains. “When it comes to sensitive questions among friends, the best thing is to be frank."  And speaking frankly, he complains of “this undignified fellow L” –  seemingly the New York lawyer,  journalist and one-time editor at The World,  Saul Raphael Landau, who had recently, and acrimoniously, broken with Herzl:

First this scoundrel pushed himself forward, and then exploited me, and, when I finally threw him out, he went as my worst enemy to my worst enemies. It is a miracle from God if I don't become an anti-Semite.

In closing, Herzl sends, as always, his most cordial greetings to his champion, “my dear master Arthur” - Arthur Levysohn, the editor-in-chief of the Berliner Tageblatt – of whom he will never be able to think ill “on account of the poisoned arrows which fly in my direction from the B.T."

Herzl was also consumed, as of writing this, with Zionist business: all of this was taking place as he launched, against great odds, the financial organ of the Zionist state, the Jewish Colonial Trust.
Autograph Letter Signed, in German, 2 pages, on the letterhead of the newspaper Die Welt [The World], emblazoned with a Star of David, Vienna, March 6, 1899. To Ulla Wolff.

Thanks for your kind letter.

Something odd happened in regard to your story. The accompanying letter had been misplaced, I only found it a few days ago in the manuscript, to which I did not pay enough attention while in the throes of my overwhelming work. Now I will soon read it.

But a preliminary question, la question difficile.  What payment do you expect for the story? The "Welt" unfortunately has to make its calculations. I certainly do not want to disappoint you, nor can I impose too heavy a burden on the journal. When it comes to sensitive questions among friends, the best thing is to be frank.

It is sad that I have to deal with this undignified fellow L. First this scoundrel pushed himself forward, then exploited me, and, when I finally threw him out, he went as my worst enemy to my worst enemies. 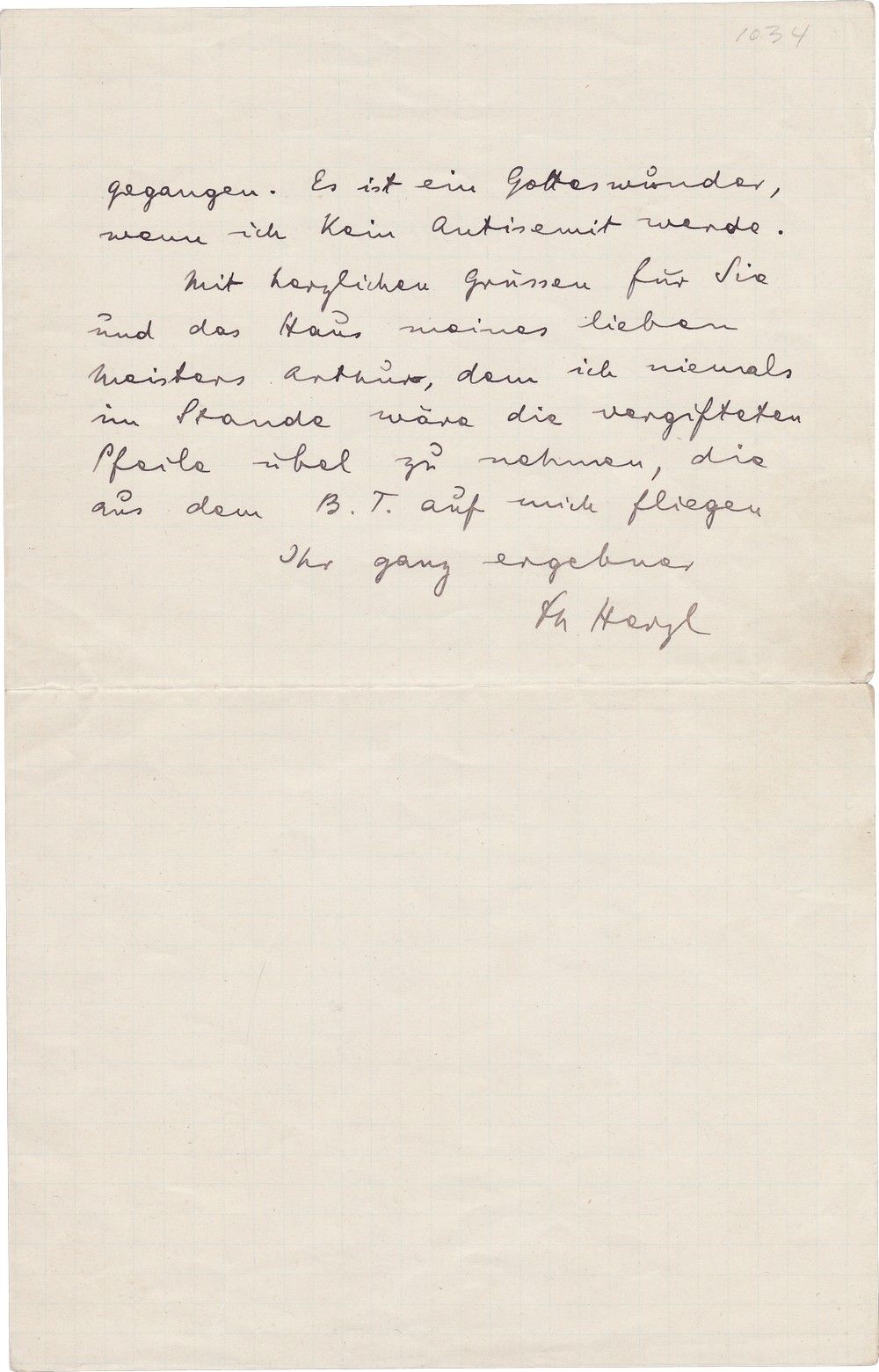 It is a miracle from God if I don't become an anti-Semite.

With cordial greetings to you and to my dear master Arthur, whom I would never be able to think ill of on account of the poisoned arrows which fly in my direction from the B.T.

Mark Twain to French Jewish Writer Marcel Schwob: "I Do Commit Crimes, But They Are Not of This Grade"